First-ever official biography of Swell Maps, 'Swell Maps 1972-1980' penned by band member and co-founder Jowe Head. Swell Maps were formed in Jowe's home town of Solihull, England with various school friends in 1972.The group, also featuring the late Nikki Sudden and Nikki's brother, the late Epic Soundtracks, along with Phones Sportsman, John Cockrill, and Richard Earl emerged in the late 1970s, and are now known as legendary pioneers of what is now referred to as 'alternative rock' or 'post-punk' with their blend of punk rock mixed with experimental and psychedelic sounds. Together they released four 7" singles, the first in 1977 on their own Rather Records and two critically acclaimed albums in a brief but dramatic career, that led to them topping the UK independent charts, and influencing bands such as Sonic Youth, Nirvana, and Blur. After Swell Maps broke up in 1980, Jowe joined the Television Personalities. Ten years with the TVPs saw Jowe making more influential records, touring Europe regularly, and playing in Japan and the USA. Today he still regularly releases recordings, solo and with multiple groups, and is the steward of the Swell Maps legacy. In this 155-page biography of the band, Jowe takes us to each member's formative years and reveals what made them experiment with challenging music and eventually come together to form Swell Maps. Through his own recollections and utilizing interviews with former members, he explores the early days of the band, and details stories that bring the reader into the inner workings of the band as they traveled through the late 70s cultural scene in Europe. The last section of the book updates the whereabouts of all the key players.
The book includes dozens of full-colour images of band memorabilia from the author's personal collection, including photos, posters, flyers, artwork, original lyrics, and more.

ADAM: "This looks amazing - a biography of Swell Maps by?Jowe?Head from the band. Often seen as pioneers of post-punk, their story predates that era and encompasses so many sounds and styles - lo-fi, glam, punk,?motorik, noise, rock'n'roll. A wildly experimental band whose influence stretches far and wide.?The book comes with a 7" record of rarities. Stock is expected on February 18th." 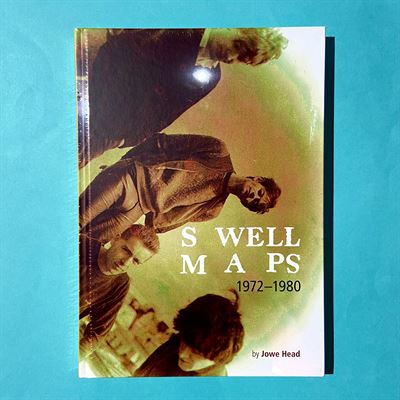