? LUC SANTE on 'Crawdaddy' magazine
? Debut publication of often hilarious and always droll
memoirs by STUART MOXHAM (Young Marble Giants,
Gist, solo, etc)
? Murat Cem Meng??' dramatic tale of when SUN RA and
the Arkestra visited Istanbul, Turkey in 1990
? The fantastic and true story of electro-pop pioneer,
runway model, and Eve Babitz-ish character ANN STEEL,
which has never fully been told before now.
? In conversation with comedy guru TOM SCHARPLING in
advance of the publication of his moving and hilarious
new autobio.
? Archival interview by Steve Lafreniere with 'Honeymoon
Killers' star SHIRLEY STOLER.
? Overviews of new music from DAVID NANCE, PATRICIA
BRENNAN, and PHAROAH SANDERS with FLOATING POINTS.
We're so enamored with the Floating Points/Sanders collaboration
that we had no less than Andy Beta go off on it at length, for what
is our first "real" record review (as we're a quarterly, that's not
something we'll do too often but the stars aligned.) 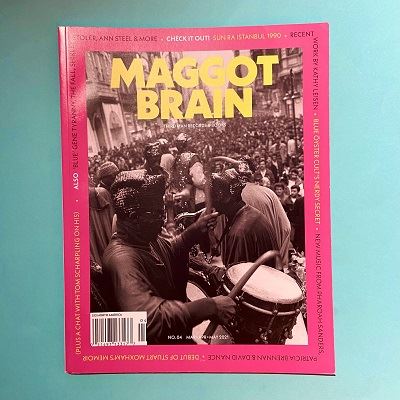