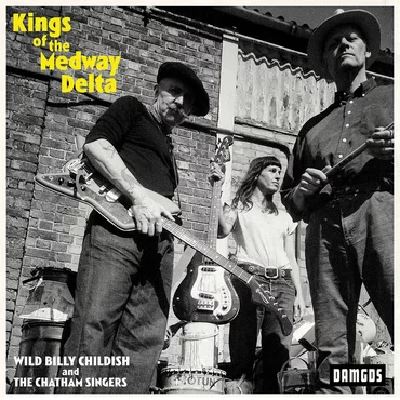 The first Damaged Goods release of 2020 is a brand new album featuring Wild Billy and his regular cohorts Nurse Julie and Wolf Howard. It's the third album they've released as The Chatham Singers and features twelve tracks of gritty Chess Studiostyle blues with Billy on great vocal and lyrical form throughout. We asked Billy a few questions about the record... This album follows CTMF’s Last Punk Standing LP and is something of a left turn. What prompted the decision to make a blues album?I've been making blues recordings since the early 1980s. We've made a few Chatham Singers LPs over the years and I've been meaningto record another and just got round to it. I'm still making regular CTMF recordings at the same sessions it's just the fun of working with different sounds. I was listening to Slim Harpo ('Got Love If You Want It') in a cafe, Jim form Ranscombe Studios was having a coffee and I said “this is a great song, we should try to get that echo chamber going.” Next day he said he'd been messing with it and I said “right, let's record!”How does this differ from the previous two Chatham Singers albums? Less country, no poetry, more developed sound, otherwise the same. It features fantastic blues harp playing by guest player Jim Riley, tell us a bit about him. Jim plays with us on the other LPs as well, I just wanted to highlight that a bit on this LP. I've known Jim since '77 when he was in the localR&B group, Wipeout, and I was in the local punk outfit The Pop Rivets. We played together a fewtimes and became pals back then. Jim now runs the local studio where we record with my drum kit from Thee Mighty Caesars. You’ve really captured that authentic gritty urban blues sound. Gearheads will want to know what guitars and amps you used? My same old Selmer Truevoice guitar 15 amp I've used since the Milkshakes, a 15 Selmer bass combo (15 quid from Rochester flea market. A '59 Jazzmaster guitar and an old Hagstrom bass that Thee Headcoats got on the cheap in Seattle. As the album is titled Kings of the Medway Delta, what do you think those other Kent-born musicians, Keith Richards and Mick Jagger would make of the album and how does it compare to their work? We got the sound ofthat Chess Studios echo chamber, so I guess they'd be pretty envious. I love the Rolling Stones when they were R&B fans, not so much after the rock set in. Your recent live shows have been very well-received. Any plans to play some specifically blues-based shows in 2020?Not at the moment, let's see.