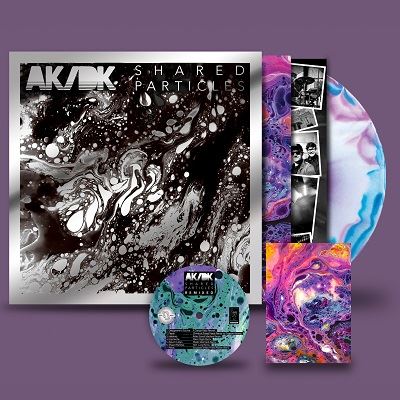 Even when artists say they theyâ€™ve discovered who they are on their latest record, it doesnâ€™t really work that way. You never stop striving to discover more about yourself - thatâ€™s just being human; and itâ€™s something that two-headed electronic rock party outfit AK/DK understand. As Ed Chivers and Graham Sowerby announce the release of their third album Shared Particles, itâ€™s what makes the dual drums and synth pairing such an exciting prospect. Shared Particles propels itself relentlessly forwards, thrusting onwards in pursuit of a finish point that may never come. The two-piece have always loved the motorik of the 70â€™s like Kraftwerk and Can, bands that revelled in the journey as much as the destination. They also describe themselves as â€œlike a chunkier Devoâ€ â€“ and, yes, thereâ€™s a warmth to the textures of their music from the modular synths and other self-built pedals in their set up, while thereâ€™s a driving rhythmic constancy too. AK/DK arenâ€™t re-imagining the past though; tracks like opener Feeds or the bouncy hooks of Data Beach are a dive forwards, with dirty synths whirring around percussion that threatens to punch itself out of the speakers. Or thereâ€™s the title track, more frenetic still in its squalling feedback and breakneck pace, the duo setting it towards orbit with a hefty dollop of mind-melting psychedelia. As anyone whoâ€™s seen their high-octane live show might suspect, the challenge for Chivers and Sowerby is squeezing all of that sweat-drenched energy of a packed club onto record. â€œWe really wanted to combine the two elements of the band on this record, both live improvisations and more studio based songwritingâ€ they explain. â€œWhat we really miss in the studio is the live audience and weâ€™ve definitely tried to capture the spirit of our stage shows and the ebb and flow of the energy in the room, whilst still putting together songs and ideas.â€ Sure enough, while AK/DKâ€™s way of working is initially to build up ideas through improvised jams until thereâ€™s a structure to build on, the twelve tracks here are more refined than just tripped-out wigouts. The bandâ€™s ear for a melody has grown only growing stronger, the likes of Wait and Return to Zero filled with subtle hooks that leave themselves in the mind long after the musicâ€™s departed. The queasy, distorting Casio Beguine, meanwhile, is an example of the pairâ€™s newfound restraint. â€œWeâ€™re always trying to capture the different sides of our sounds and influences so we end up with a slight smorgasbord of tracks,â€ they say. â€œSome are strictly electronic, others are more disco, and some kosmische-style builders. For us it's all about tension and release, playing with the hypnotic loops and synths.â€ Itâ€™s fair to say AK/DKâ€™s own horizons have broadened vastly since the groove-laden krautrock disco of 2017â€™s Patterns/Harmonics. Thereâ€™ve been festival slots at the likes of Bluedot and End of the Road, ever-increasingly-sized rooms to play on tour and - appropriately for a band started as a â€œa sonic-art actâ€ - cross-theatre shows, including a set as part of â€˜Party Skills For The End of The Worldâ€™ at Manchester International Festival 2017; as well as making their own audio-visual show â€˜The Sleeper Awakesâ€™ at Shoreditch Townhall. Perhaps most impactful though was a cultural exchange that saw AK/DK put together some of Shared Particles in BelÃ©m, Brasil. â€œWe played festival shows over there and in Argentina and managed to spend a week in the studio; working on our own stuff but also playing with local musiciansâ€ they say. â€œIt was an unbelievable experience. We collaborated with artists using their audio samples of local indigenous tribes and live VJs using their own Amazonian-inspired visuals.â€ Thematically AK/DK are sprawling, although the vocals that do drift over their songs arenâ€™t explicit. Nevertheless, writing the record was done amidst thoughts of how the internet and social media can unite and divide society, and how political forces have been able to manipulate these tools. You could perhaps point to Defragment To Surviveâ€™s title as a summary of the recordâ€™s lyrics, inspired as it is by the idea that our minds have become more robotic and computer-like - and that they need to be defragmented, like you would a hard drive on your laptop. â€œReally, though, our message is one of togetherness and unity,â€ they say. â€œItâ€™s quite a strong political message in itself when people come together for music.â€ Ultimately itâ€™s that message that holds the band and their music together. As the name Shared Particles suggests, we are all as one living together, and this is music that couldâ€™ve found a home everywhere from rave and free party scene to the punk community. AK/DKâ€™s initial ethos was to break down the invisible screen between stage and audience. Theyâ€™ve always tried to capture that on record, and this is the closest theyâ€™ve come... so far.