Today, CocoRosie, the sister duo Sierra and Bianca Casady, announce their 7th studio album Put The Shine On, which will be released March 6th 2020 via Marathon Artists. The follow-up to their 2015 album Heartache City will be accompanied by their one-of-a-kind live shows througout Europe.

Earlier this summer, CocoRosie first returned with a new Chance The Rapper collaboration �Roo� (co-written, produced and performed by CocoRosie) on The Big Day and they released their first new song in 2 years called �Lamb & the Wolf�. The single featured artwork by legendary theater director, visual artist and their frequent collaborator, Robert Wilson and came after the January 2017 single "Smoke 'em Out" (feat. ANOHNI).

CocoRosie about �Lamb & the Wolf�: �We are happy to announce that a new track called Lamb & the Wolf! It's a sweltering summer jam to funk to. It's a whole new set of colors for us; yellow, orange, red and green mostly. There's something kind of early Sesame Street about it but you can dig for yourself. Get on your sweatbands and prepare for some high kicks and karate chops or least loud claps. We hope you enjoy. Love, CocoRosie

CocoRosie is the music-based project of American cross-disciplinary performance artists Sierra and Bianca Casady. Their songs blend a myriad of styles and references, from hip-hop to folk and opera, shaping the most painful of experiences into memorable and evocative pop songs. Taken as a whole, CocoRosie�s music is an ongoing psychologically intimate dialogue between the siblings. Each sister has multiple personae and vocal styles; Bianca delivers troubadourian-style rap while Sierra often responds with ethereal tones while accompanying their voices on harp, piano, or guitar. A quintessential part of their sound is a percussive landscape made using children's toys and other found objects which adds a particular nostalgia to their songs. In their fifteen years as CocoRosie, the sisters Sierra and Bianca Casady have released six albums: Heartache City (2015), Tales of A Grass Widow (2013), Grey Oceans (2010), The Adventures of Ghosthorse and Stillborn (2007), Noah's Ark (2005), and their first album, La Maison de Mon Reve (2004) -- each one inspiring controversy and debate in equal amounts to praise; such is their fearlessness and willingness to take risks with their art. This strong creative vision runs through every aspect of their work - from videos to live performance utilizing theatrical costumes and make-up - which they create alongside each new body of songs.

Finding expression for their ideas in other disciplines beyond the traditional musical parameters is paramount to the sisters - and often a source of inspiration for their songwriting. In addition to their album tours and festival performances worldwide, Bianca has held solo exhibitions of her artwork in NYC at Deitch Gallery and Cheim and Read. Bianca has choreographed �Nightshift� at Kampnagel Hamburg, a dance production while sister Sierra created an experimental �popera� named �Soul Life,� both staged at the Donau Festival in Krems and directed two theatrical performances with the National Theater Academy in Norway. Sierra has arranged and performed music in collaboration with the likes of the Symphony Orchestra of Amsterdam, The ICA in London and The Sydney Opera House. Currently Sierra works on a lead role in an opera written and directed by her sister and composed by both that will premier at the Manchester Festival in 2021.

Most recently, CocoRosie has composed original scores for four full-length theatrical works by Robert Wilson: Peter Pan, Pushkin's Fairy Tales, Edda and Jungle Book and now creating The Tempest for upcoming premiers. This year they presented the second series of songs written for a collaboration with the Kronos Quartet at their Jazz Festival in San Francisco, which is leading into a recorded album with songs composed by CocoRosie in the near future. 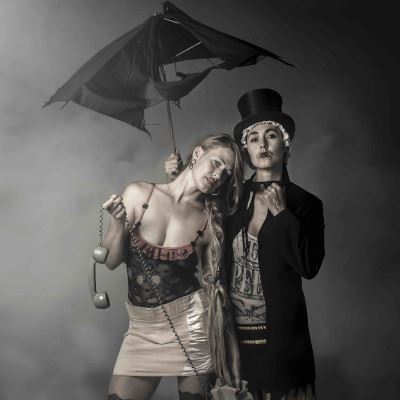