Tom Clarke is the former frontman and principle songwriter for The Enemy, who sold over 1 million records worldwide, with a number 1 UK album, a number 2 UK album as well as another top ten and a top twenty album and several top ten singles. The band received awards from Q Magazine, NME, XFM amongst many others. They hold the record for most consecutive shows at the legendary London Astoria, after bettering the record set by britpop greats Blur, and have supported the likes of The Rolling Stones, The Sex Pistols, The Manic Street Preachers, Oasis, The Stereophonics and many more over a career which spanned a decade.

Tom is also a ghostwriter for other contemporary and emerging artists.

As well as writing music Tom is a founding director of The Empire, a 1000 capacity music venue and nightclub in Coventry. In 2016 The Empire was nominated for â€œBest New Businessâ€ award. In its first twelve months The Empire has hosted The Libertines, Lee Scratch Perry, Frank Turner, The Levellers amongst a plethora of sell out shows, as well as putting on regular club nights featuring the likes of Jaguar Skills, Scott Mills, Tim Westwood and many more talented acts.

Tom occasionally makes appearances as a DJ, often with accomplished DJ Kate Frost. Articles and features written by Tom have been published in Q Magazine, Music Week, The Coventry Telegraph and other respected media outlets. A selection of these articles can be found at the bottom of this page.

Tom is a strong campaigner for the arts, in June 2010 Tom Clarke backed an art galleryâ€™s bid to win the UKâ€™s largest single arts prize. The Herbert Art Gallery in Coventry was shortlisted for the Â£100,000 prize. In 2016 Tom leant his backing to Coventryâ€™s City Of Culture 2021 Bid (see article at bottom of page).

On 27 February Tom Clarke participated in the â€œRace For Heroesâ€ alongside stars of British motor-sport and British soldiers for the Help For Heroes organisation. The six-hour endurance race aimed to raise money and awareness for the charity, which is a charity formed to help those who have been wounded in Britainâ€™s current conflicts.

Tom has been outspoken about his personal battle with depression and has criticised the music industries lacklustre approach to confronting bullying, especially within the popular media as well as stating that the music industry is one of the few remaining workplaces which has no regulation against bullying and no safeguards for musicians who are statistically more likely to suffer with depression and anxiety and are therefore more vulnerable and susceptible to the harm bullying can cause. 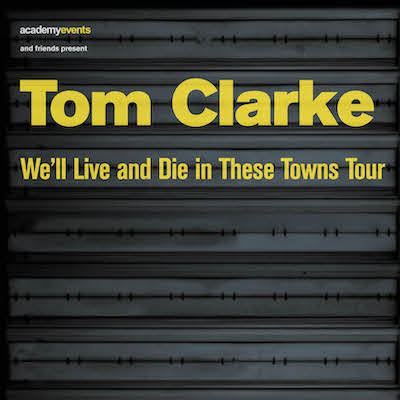