Siv Jakobsen sits in her Oslo apartment, waking early in the morning to the semi-light outside the window. The chill wraps around her as she settles to write, and write, and write. Come afternoon, as darkness encloses, she lights flickering candles and continues to write through to the evening. Safe and sound in her home.

Having toured extensively since her debut EP, The Lingering (2015), and debut LP, The Nordic Mellow (2017), Siv owed her tired body and mind a rest and time to settle at home in her native Norway where her catalogue of songs are firmly rooted. With willowy vocals that spin fragile folklore stories told under the reflective nostalgia of moonlight, and ice cool strings delicately picked with intricacy, her songs are like intimate embraces protecting from the cold with enough heart to rekindle a fire. Finding herself back in a familiar environment allowed Siv to reconnect and reflect on the last few years of releasing records and playing to audiences around the world.

Sivâ€™s forthcoming record via Norweigan label, U OK?, A Temporary Soothing (2020), was recorded with producer Chris Bond, whose credits notably include Ben Howardâ€™s first two albums. Due to heavy work commitments, the pair met in intense one and two week periods over the course of almost an entire year. This space between recording stints allowed Siv time to progress the album and build herself up to try bolder things. There was no rush to complete anything and no need to settle in order to do so. The sense of freedom and safety collectively created what could be seen as Siv 2.0., her growth and development captured on record.

â€œThere is often a preconceived notion made about artists who write â€œsad songsâ€, that they must be sad people. I have made the same presumption about others in the arts and this idea of the â€œsuffering artistâ€ stuck more and more to my consciousness after several encounters where I felt I was met with amusement that I â€œseemed like a happy personâ€ and how could that be when I wrote â€œsuch sad songs?â€â€ Siv recalls as the catalyst for writing A Temporary Soothing. Confronted with this idea, and as a self-confessed worrier and over-thinker, she found herself consciously wondering about it and whether she had ever constructed sadness to allow herself to write emotionally and well.

â€œThis album was conceived from this building fear that I wouldnâ€™t be able to be both happy and a good writer at the same time. Ultimately, it developed into a broader look upon my relationship with fear and nervesâ€ Siv explains. These anxieties pour into album opener, â€˜Fear The Fearâ€™, cinematic strings move like waves breaking on the shore and Siv outlays her feelings of disconnect, singing; â€œShake It off, I canâ€™t, I wonâ€™t. â€˜Cause what would I write about if I donâ€™t fear the fear inside my bones.â€

Collectively, the songs on the record map the ebbs and flows during this particular chapter of her life. â€˜Anywhere Elseâ€™ is a number that captures the constant feeling of fear and anxiety that buzzes and flickers like a lightbulb that needs changing, whilst â€˜A Feeling Felt Or A Feeling Madeâ€™, written early in the process of the album, is a gentle number with tentative beats dancing to an angelic wondering and mediative vocal. â€˜From Morning Made To Evening Laidâ€™ is performed almost as a cautionary tale, the song teetering on destruction with a dramatic rise and fall, and the lighter â€˜Islandâ€™ wouldnâ€™t feel out of touch soundtracking a joyful montage during a rose tinted come-of-age indie movie. Album closer, â€˜I Call It Loveâ€™ is emotionally stirring and utterly beautiful in its intimacy. It is an unconditional declaration of love and gratitude; a peek at a diary entry, a glance at a love note passing hands. â€œTo you, Iâ€™ll always float, I want to be your nearest safety boat.â€

A Temporary Soothing takes its name from a line in â€˜Only Lifeâ€™; a soothing ode to the effects of being with someone who is struggling mentally and how it seeps from them into everyone theyâ€™re close to. "It's always been really important to me to write vividly and honestly. But honestly doesn't necessarily mean truth. It's poetry, it's art. It can be auto-biographical and personal but that doesn't mean that every little detail is exactly as happened.â€ Siv explains, â€œFor me as a writer, it's important to write honestly, with depth, to stimulate the listener and place them in the room so they can really feel all of the dimensions I want to convey and identify with the situation."

Sivâ€™s songs are immersive. Born in those candlelit rooms encircled by Norwayâ€™s expansive skies, there is a never-ending canvas for her to conjure up and recall memories. Using raw acoustics and emotively fuelled vocals to tell her beautiful stories, Siv travels with listeners as they explore her textured soundscapes.

â€œItâ€™s a cliche, and everyone says it, but it really does feel like a form of therapy to write.â€ Siv says, â€œTo perform a song is like having a pocket frozen in time, and every song takes me back to a certain moment or part in my life. Theyâ€™re like little time capsules. There are songs that I wrote years ago and I can remember the situation that prompted the song, what the room I wrote it in looked like, what the weather was like. Itâ€™s like keeping a really detailed diary.â€

Having studied Vocal Performance at the prestigious Berklee College of Music, Siv originally did not know the type of musician she would become. It was only when she was presented with a notebook and a pen by a friend that she signed up to a songwriting class. By the second lesson, she had felt the lightbulb moment. In writing songs, she had found her voice and was able to craft her identity as a performer using her own experiences.

â€œMaking music for me is a way to process my life and what is happening and how I'm feeling physically and mentally. Writing songs is a way for me to digest and see it more clearly.â€ she explains.

With her latest work, it was only after a year of writing and recording that she realised the undercurrents and the themes to her music. â€œIt's a way for me to look back and see what I have been going through, both the good and the bad. What I hope for is that people can take it and understand what they have been going through personally, too.â€ 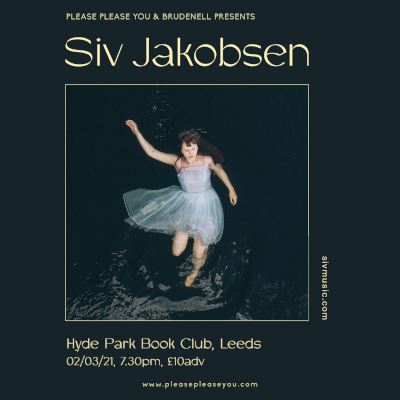