Raised in the Dales village of Addingham, Sam began performing in and around Leeds in 2004, with word spreading further afield with the release of his 2009 debut album Close To Home. Performing at SXSW in Austin, Texas in 2010, he has toured the US widely, usually in the company of friends and fellow skaters The Pine Hill Haints. Along the way, Sam has shared stages with the likes of Katherine Tickell, Lucero, The Young Un's, Frank Fairfield and Karine Polwart, and received airplay and praise plaudits from the BBC’s Bob Harris, Gideon Coe and Marc Riley.

“The sustained brilliance of this playing is really something to behold.” Bob Harris, BBC Radio 2

“Songs that rattle with the ghosts of Appalachian folk, and southern blues, yet sound emphatically English.” Uncut Magazine

The Burner Band bridge the gap between bluegrass, country and rock n roll. The new self titled album boasts a possible world first: a bluegrass song denouncing The Sun newspaper. The previous album “Dark Wheels Turn Above Our Heads” was in 2020 and features 11 politically charged folk punk songs. In 2018, Lewis released his debut solo album Dog Songs”, featuring themes of recovery from depression and the tragedy of the Bradford Stadium fire. The band’s live performance is an energetic combination of guitar, banjo, double bass snare drum and vocal harmony. 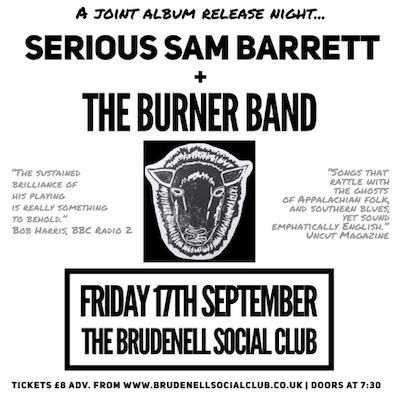