Anyone who believes there are no second chances needs to be re-introduced to Ren Harvieu. Seven years after her Top 5 debut album, having overcome a life-threatening injury, the Salford-born singer-songwriter returns with “Teenage Mascara”, the first track from a new album due for release Spring 2020 via Bella Union. The album is a brilliant, bolder and broader take on her timeless pop classicism, a compelling diary of a struggle with self-belief and a celebration of liberation and survival. “Teenage Mascara” is accompanied by a colourful and exuberant video directed by celebrated photographer Rankin. Of the track Harvieu says: “I see Teenage Mascara as a dance between the many versions of ourselves. The woozy, dreamlike intoxication of the music helps swirl those emotions we sometimes have where we can go from feeling like sultry sex kittens to being bedridden with despair and greasy hair. I think it’s important to celebrate it all, the sass through the tears, the vulnerability behind the make up.”

Harvieu has come a long way from the 17-year-old who was signed to Island Records and who had no intention of becoming a singer-songwriter. Even when she made her debut album “Through The Night”, her confidence was low. “I did help write a few of the songs on that record, which I’m still very fond of, but I felt more of a mouthpiece for someone else’s talent, which eats away at you especially because I had so much to say lyrically I just hadn’t learnt how to as yet. I couldn’t fathom that people were responding to the emotion in my voice. Maybe I was scared of harnessing it’s real power.”

Her injury – a broken spine following “a freak accident” between recording and releasing her debut album – undermined Harvieu even further. Likewise, Island parted ways with her six months after it’s release, despite a Top 5 chart entry, making the BBC’s Sound Of 2012, a 5-star live review from The Guardian and TV exposure (2012’s BBC Proms, singing two James Bond film themes backed by the BBC Philharmonic, was a particular highlight). But she remains sanguine about that part of her life. “I wasn’t surprised, or angry, or devastated when my relationship with Island ended. I didn’t really know them and they most certainly didn’t know me. And I was still dealing with extensive injuries. I had to work out how to re-emerge into the world and ask myself did I even want to.”

What followed was as Harvieu describes as “some very dark years”. A split with her long–term partner, her manager and then her beloved Salford. “In one fell swoop everything was gone. I knew I had to get away, start again, rebuild myself”

It wasn’t until 2015 to be exact, when she met Romeo Stodart, the Magic Numbers frontman and songwriter who had emailed after seeing her perform on Later… With Jools Holland, to ask if she’d consider writing together. “When we started, the energy was immediately different to anyone I’d worked with before, there was this insane instant musical connection” she says. “I loved that Romeo really embraced who I was and encouraged it. I was starting to realise that I didn’t have to be anything other than myself.”

The pair spent the next two years co-writing: “I wasn’t in a massive hurry, because at last I was having fun” Harvieu says. ‘We’d stay up all night drinking, dancing and playing music, I felt like I was re-discovering a girl who had been hidden, quietened. I’d tell Romeo, I don’t just want to paint pretty pictures I want to revel in the drama of my life, the good and the bad, before I was afraid to say something in my lyrics, but no longer. I felt free.”

The album was co-produced by Romeo Stodart and Dave Izumi Lynch, owner of Echo Zoo studio in Eastbourne where recording took place.

The final piece of the jigsaw was a new record label that she could call her home – Bella Union. “Ren’s name kept cropping up from friends in bands and other folk whose taste I appreciated,” recalls label boss Simon Raymonde. “I was struck by her incredible voice, the classic arrangements and the quality of the songs. She’s got this seemingly effortless cool style countered by a very deep emotional connection.” 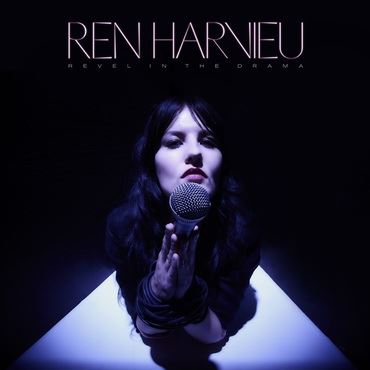