TWILIGHT SAD (THE) 'STRIPPED BACK'

“If the world was a better place they would be playing to more people, and I think they can”

From their unassuming origins as a group of school friends drawn together by a shared passion for music to the global touring force they have quietly become, The Twilight Sad’s ascent has been forged the old way with grit, graft and four exceptional studio albums. The Kilsyth group – based around the core duo of James Graham and Andy MacFarlane – seemed to emerge fully formed with their blindsiding 2007 debut Fourteen Autumns and Fifteen Winters but there has been an undeniable evolution throughout the critically acclaimed body of work they have since produced. “When we started this it wasn’t about anything other than making music that mattered to us,” James offers. “Four albums and countless tours later, our agenda is still to write something which is true, honest and exciting to ourselves, but we have also realised that what we’re doing matters to other people. When our music connects it can become as important to them as it is to us.” With a clear sense of purpose and a visceral collection of songs that backs up a newfound confidence, The Twilight Sad return this autumn with their first full-length effort since 2014’s Nobody Wants to Be Here and Nobody Wants to Leave. An exhilarating listen, by turns cinematic and claustrophobic in its scope, the band dug deep to produce It Won’t Be Like This All the Time, perhaps their most raw and dynamic take on the stuff of life so far.

The album’s story starts in the middle of the band’s longest break from the studio; their course was altered by a new alliance with The Cure which began in earnest with Robert Smith’s stirring cover of ‘There’s a Girl in the Corner’ in 2015. Two emotionally charged groups, generations apart yet undeniably cut from similar cloth.

“We were in the typical cycle of recording a new album to tour every two years,” says Andy. “I had previously mentioned to Robert that if they ever needed a support band, we’d love to do it – not thinking he’d take me seriously. Not long after, he sent over some dates and asked if we were available. It was the perfect excuse to break up the routine we’d found ourselves in and all pretty surreal.”

As sliding doors moments go, this was fate shaping material. It’s no understatement to say that The Cure’s mentorship has set the band on a trajectory we are yet to feel the full force of. Having scaled new heights on what ultimately became a year-long transcontinental trek with their idols, the band were uniquely placed to sketch out their intent for the next chapter.

“I’d call all that a once in a lifetime experience, but it’s not an experience I ever dreamed of in my lifetime,” says James. “Getting onstage every night, on that level, playing our music and seeing people react – I’ve never expected to be in that situation. The fact that it was working was pretty crazy to experience. To know we could connect with even a tenth of that crowd is mind-blowing to me. It opened my eyes to the idea that what we’re doing has legs. If we keep doing what we’re doing we can keep on reaching higher.”

“After a while, seeing how those songs were put together, it started to bleed into what we were doing,” Andy admits. “It gave us time to reflect and think quite carefully about what to do next. When we got back it was a case of trying to decide where to go with it.”

Upon returning to the UK and the isolation of his London home, Andy distilled the band’s collective aspirations – to find immediacy in their writing, to bring a new hugeness to the often dark matter of their songs – into demos for the fifth LP. Following six months of pre-production, his vision was made flesh during a productive residency in a remote rehearsal space on Loch Fyne last November. Eager to keep momentum, the band subsequently tracked their efforts at Devon’s Middle Farm Studios with long serving live engineer Andy Bush in January of this year.

The amicable departure of founding member Mark Devine meant that the band had to shed its skin to evolve once more; James and Andy officially brought long-time touring members Brendan Smith (The Blue Nile, The Unwinding Hours) and Johnny Docherty (Take a Worm For a Walk Week, RUNGS) in from the wings to help push The Twilight Sad to the next plateau.

“I’ve always seen them as part of the band and it’s time to say that aloud,” James affirms. “From the actual coming together of the demos to recording the final versions of these songs has probably been one of my favourite experiences of being in the band. All four of us were throwing ideas in, whereas before Andy had mapped it all out. Once he got past the point of making the demos his point of view was ‘we need to make these even better. These need to take a step up from where they are.’ He opened the floor to everybody.”

“The more you commit, the more you want to have your own influence and impact,” says Brendan, now six years into playing live with the band. “That’s definitely true of this album. We didn’t know how it was going to work but at no point did it feel forced or uncomfortable. Quite the contrary – it felt like a natural transition for Johnny and I to be involved.”

“When we were at Loch Fyne working on Andy’s demos, it felt like much more of a band situation than ever before,” Johnny recalls, by now locked in as an eight year veteran. “The record feels like a good reflection of everything that’s been built up over the twelve years The Twilight Sad have been around,” says Brendan. “It’s an accumulative coming together of everything that all of us have been through or done. It’s a testament to how Andy has progressed and shifted and the way James’s vocal style has grown. I think this is the strongest he’s ever sounded on record, he’s grown so much in the last couple of years. I saw him screaming in anger on the last record because there things he wanted to do but just couldn’t. This time it was different.”

Overcoming borders – both real and perceived – with the purity of their records, The Twilight Sad offer a rare sort of catharsis that comes from a primal place. It Won’t Be Like This All the Time is not some empty lunge for the big league – the band have been paying their dues for too long to care about competing for a fleeting chart position.

“Writing a record isn’t easy, certainly not having made four others beforehand,” James admits. “You’ve got a standard there, but you want to beat that standard. At the same time there’s a moment that you’re living in that you need to be true to – in terms of what’s happening to you and what you can realistically write about. Don’t do that a disservice. Make sure the stories are coming across in the way you want them to. It has been hard to get here but I am so proud of this record. The excitement all four of us have for this is the whole point we’re here. I can see that in every single person.”

With a new label in their corner – Mogwai’s Rock Action Records – there’s a palpable sense that The Twilight Sad have arrived home. “Mogwai took us on tour early on, offered advice when we needed it, lent us gear to record and now we’ll officially be part of the Rock Action family where they have given us the freedom to make the record that we want,” says James. “They’ve been hugely influential and I’m excited to give something back for all the good faith they’ve had in us over the years.”

As their focus returns to the international stage with two major tours in the offing, the band are as eager to connect with fans old and new as take strides into the unknown. “It feels like everything’s in uncharted territory at the moment,” Andy offers in summary. “Technology has drastically altered the landscape, it's given people more control over what they listen to.” James chimes in: “For all the damage the internet has done, I find the world a strange place. Rather than interact on devices with people, I’d rather get out there, see them, talk to them and play our music for them. We haven’t done that in a long time. I just want to be face to face with people.” 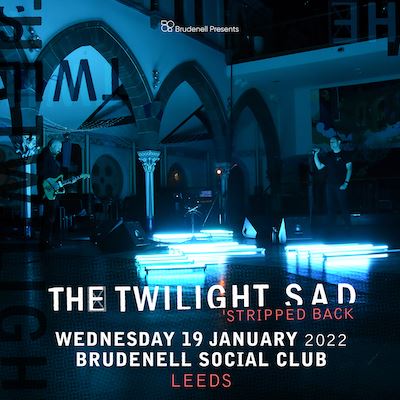